One of the reasons that I decided to use N2 gas as the coolant for Adams EnginesTM is the fact that helium supplies are limited enough so that a new large demand would drive up the price of the gas. I fully expect that someday, direct cycle gas turbines using nuclear heat sources will have the potential for rapid market expansion; I determined a long time ago that I did not want to limit the potential for that expansion based on a limit to the amount of available helium.

Since it is an element and a noble gas that is produced by a very slow process - decay of uranium, thorium and their daughter products - helium could be the bottleneck that would slow development and deployment of Adams EnginesTM. I can point to a lot of esoteric science papers that supported the decision to go in a completely different direction than the conventional gas cooled reactor wisdom as practiced by companies like PBMR and General Atomics, but this video does a much more entertaining job of sharing the reasons for my concern. 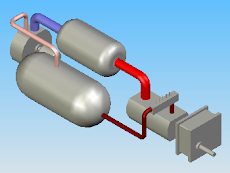